Since the advent of Office 2013, I've been increasingly frustrated with the new Outlook contact cards, and the round-about way needed to access the legacy GAL properties dialog as shown below: 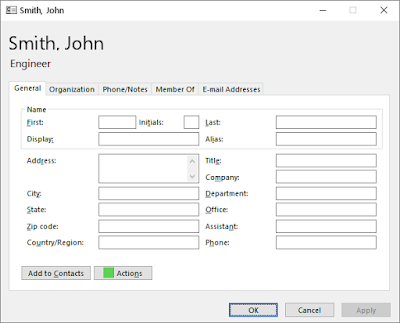 After a ton of research, I discovered it's possible to add custom context menus within the Lync 2013 / Skype for Business client, as per this page from Microsoft.  From here, I needed to discover the API necessary to actually launch the legacy GAL properties dialog box.  Doing a bit of research, I simply could not find an easy way to do this, the only thing I was coming across was the following registry key, which just launched the GAL properties box from within Outlook:

Nearly giving up after hours of digging through the API and searching, I was provided some help via Dmitry Streblechenko on StackOverflow (thank you, Dmitry!).

In the end, I ended up with a simple VBS and registry key:


Boom!  After restarting Skype for Business, I was treated with the following view: 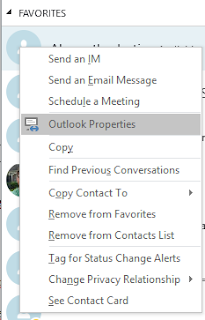 It's quite unfortunate that Microsoft removed this functionality within the newer versions of the Lync/Skype clients, but at least with a little bit of elbow grease I was able to recover it...for now.

It appears that the "wscript" command is no longer working (for some reason).  I was able to workaround this by creating a C# project with the following source code:

If you do not have Visual Studio installed, but you DO have .NET v4+ installed, you can compile the application like so:

After my program was compiled, I was able to update my registry key values for ApplicationInstallPath and Path -- once this was done everything was working again.

My name is C. L. Jones and I currently reside in Charlotte, North Carolina. When not working as an operating systems engineer, I spend my free time tinkering with computers & electronics.